What I Think About Censorship 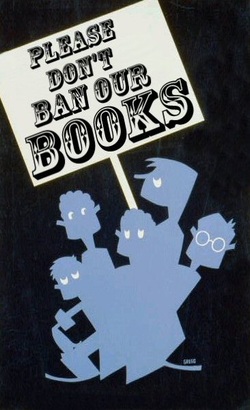 I am a firm believer in the First Amendment of the US Constitution. I believe that freedom of speech should not be limited in any capacity. In a world that consists of over 6.9 billion people, as of October 31, 2011, it is impossible to make each and every one of them happy with any decision. There will always be someone who is offended of upset by another person's thoughts, beliefs, actions, or disagree on what they consider moral or unmoral. There are those that believe God should be taken out of everything because some may not believe in him or may pray to a different god. I for one think that as a human you have the right to say and believe what you want, so that means that when you are saying the Pledge of Allegiance you have the ability to skip the part where it says "one nation under God" if you choose. I think that just because some people have a problem with something doesn't mean that it has to be changed to fit them, because when you change it to fit them you are going to piss off the rest of the people who think different than them, then you are in a vicious circle of trying to make everyone happy. I think that this theory also applies to books and other media. Just because one parent or a group of parents think a book is too violent or has too many sexual references should every kid in that school be prohibited from reading it, even if their parents think that it’s okay? It’s my opinion that no these kids should not have their rights to books taken away just because others disagree with it. I feel that if a parent doesn't want their kid to read a book that they need to be a parent and watch what their kids are reading and doing. Government has a hard enough time doing what needs to be done to help out with creating job, the economy, and the underprivileged, so they definitely don't need to be involved in how to raise a kid. I also feel that by sheltering our kids too much we inhibit their ability to grow and flourish into well rounded adults. Books are to be used as a learning tool to teach you everything from math, science, and history to sex, drugs, and music. As a kid I learned a lot from books that involved sex, drugs and alcohol that helped me know what the consequences are to such actions, such as teenage pregnancy and drug and alcohol dependency. When I read these books as a young adult it forced me to think about what the characters were going through and how bad their struggles with these issues were. After reading about their struggles I couldn't help but to think, "Man a life like that would suck." I feel that by reading books about these topics I am a better person because I choose to take a different path where there would be less struggles.